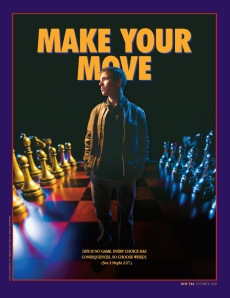 The movie “Schindler’s List” focuses on a Nazi party member named Oskar Schindler who employs Jews in his metal works factory to help save their lives during the Holocaust. When the war comes to an end, Schindler gathers all of his Jewish employees and their German guards into the main factory.

Calmly, Schindler says facing all of the German guards off to his left, “I know you have received orders from our commandant, which he has received from his superiors, to dispose of the population of this camp. Now would be the time to do it. Here they are; they’re all here. This is your opportunity. Or, you could leave, and return to your families as men instead of murderers.”

His speech moves the German guards including the commandant so much that each one of them quietly leaves the factory. They were able to return home to their loves ones as “men” instead of “murderers.”

I challenge you to re-evaluate the choices you make on a daily basis. Walk away from bad choices like these German guards did in the Czech Republic in 1945. Walk towards good choices that will make you a better person, even if that path is thorny. It is up to you to choose your identity. Who will you choose to become?

One thought on “Choose Your Identity”